I’ve been editing books for coming up on twelve years now. And I like to think that this far into the game, I’m good at it. Strike that–I know I am. Editing is one of the few things in my life   I am strongly confident about. (Yes, it’s okay to end a sentence with a preposition.) I am a nitpicker, a noticer of the tiniest details, two qualities that are essential to the job; one might call me a grammar Nazi, though I hate that phrase with all my heart. I can see extra spaces between words without visible spacing turned on, I know the difference between affect and effect, and I know when to use who and when to use whom. If there’s a plot hole, no matter how small, I will find it. If there’s a shift in tense or point of view, I will root it out.

However, I can’t do all of this without support. First and foremost among my resources is the Chicago Manual of Style, which lays out all the rules and standards for everything from when to use italics to when to spell out numbers to when to use US as opposed to United States (former for adjective, latter as a noun). It is a compendium of minutia regarding the English language and how to present it, and I love it more than almost any book on the planet. It is logical; it is dependable . I am constantly amazed by the depth to which it covers the subjects of grammar and usage. Seriously, it dives very deep.

Tied with CMoS, however, is the dictionary. Merriam-Webster, to be exact. Specifically 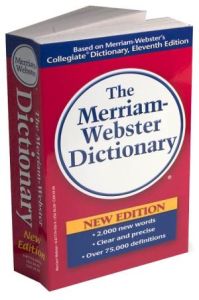 m-w.com. I would say I use it more than any other site, perhaps second only to Google, which is another essential site to have at hand when doing an edit. One of the most basic practices for an editor is keeping a running style sheet–a list of words and phrases built as the edit progresses to keep track of when the author uses unconventional capitalization, for example, or how to spell a character’s name. On my style sheet, in addition I always keep track of all the words I look up in the dictionary, in case they appear in the manuscript again. In fact, often my sheet is nothing but a list of such words. For example, during about forty-five minutes of editing tonight, I compiled this list:

Now, I didn’t look up these words because I didn’t know what they mean. In fact I rarely look up a word to find its definition. Usually I’m looking to find out whether a word is hyphenated or capitalized, if it’s one word or two, and so on. I need to know not what it means but rather how it’s supposed to look. This, I believe, is the secondary purpose of a dictionary: not to define but to dictate the standard appearance of each word. That standard is important in editing, where consistency is the number one rule; it’s even okay not to follow a rule, as long as it’s done consistently.

Lately, since we’ve started this commonplace book project, I’ve been paying a lot more attention to my lists of words and keeping them more diligently, with the intention of at some point copying them into my CPB. I don’t know why; I just like words, I guess, and the more of them the better. And I’m always interested in interesting spellings or capitalizations, in learning new things about words that might already be familiar to me. For example, I’ve recently learned that stand-alone, as in a stand-alone novel in a series, is hyphenated. I’ve been not hyphenating it for years. Now each time I get to hyphenate it (which is fairly often, given my job as a copy editor of book descriptions), I get a little excited about it. Yes, I really do. I tell you, I am made for this job.

I’ve also recently had an epiphany about my dictionary habits–or, rather, about other people’s lack of them. I don’t mean the average person on the street; I don’t expect everyone to love looking up words as much as I do. But I mean fellow writers and readers, and particularly fellow editors. I oversee other editors’ work on a daily basis, and I’m always surprised and a little disheartened by how much they let slip by: missed hyphens, two words that should be one, unnecessary capitalizations, all things they could correct if they just thought to look them up in the dictionary. When I’m editing, it’s my strict practice to look up any word I am unsure about and even ones I am sure about, just to double check (in fact I just looked up double check to make sure it’s not hyphenated). I look up words I know I’ve looked up before; I’ve looked up tighty-whities at least three times–check out the comments at the bottom of that page–and been amazed and tickled each time that such a phrase is in the dictionary.

I also look up all words with hyphens, words without hyphens that look like they should be hyphenated, compound words, and words that look like they should be compounds but aren’t. And I do this not just because it’s my job to do so but because I am curious. On top of wanting the text to be error free, I simply want to know how these words are supposed to look. That other editors don’t feel this sort of intellectual curiosity actually saddens me. I don’t mean to sound superior, but I can’t understand how any good editor could be so uninterested.

So that’s what it comes down to for me: intellectual curiosity. I really believe that people–readers, writers, editors–who don’t look up words in the dictionary, whether for definitions or hyphenations or whatever, lack intellectual curiosity, and their reading/writing/editing suffers for it. I feel like a big snob saying this, and I would never say it to someone’s face (not a grammar Nazi, remember, nor am I some sort of dictionary fascist). But I can’t imagine being so uncurious. I can’t imagine not wanting to know if man-made really is hyphenated (it is) or if Cretaceous period is capitalized correctly (it is). I guess this is what makes me good at what I do. I like to think it’s also part of what makes me who I am.

3 responses to “Tighty-Whities: A Tangent”